The Art of the Bow

The Art of the Bow is the first in-depth pedagogical study of a major concert artist utilizing state-of-the-art technology. While past research has been limited to commentary enhanced with print illustrations or single camera video, The Art of the Bow employs multiple camera angles, biomechanics, and the technology of motion capture to offer the most complete picture of the elusive art of bow control currently possible.
This project represents a milestone giving string players a rare glimpse into the subtle art of Rabbath's bow technique.The first portion of the DVD is comprised of four sections; Essentials, The Bow Arm, Lessons, and Interviews. Essentials is concerned with the basics of posture and issues regarding the tools of the bow, including bow weight, balance, and tension. The Bow Arm outlines the basic principles of Rabbath's bow technique including arm, hand, and wrist motions. This section also introduces the first bow stroke, the son premier, on which all other bow strokes are based. In Lessons Rabbath teaches the beginning bow motion to a student with no previous musical experience and demonstrates how to check your own basic bow stroke. The final section, Interviews, features over forty minutes of Rabbath's thoughts on teaching, practice, and performance. Each interview section is separated by a live performance interlude from his 2002 concert in Lille, France.
The second portion of the DVD serves as an in-depth study of Rabbath's Seven Families of Bow Strokes divided into two sections, multiple angles and biomechanics. The multiple angle portion features a brief description and demonstration of each stroke and its variations with four camera angles. By using the Angle Button on your DVD remote control or computer screen, you may access any one of the four angles during the demonstrations when they are available. Most DVD players will show a multiple angle icon on the screen when it is possible to switch between angles. The view will revert to the lecture angle once the multiple angle clip is finished. By leaving the button set to a chosen angle, that angle will be seen every time a multiple angle shot reappears. Live performance footage demonstrating each stroke appears between each of the families.Biomechanics, A Silent Motion Study offers the viewers the opportunity to "play along" with Rabbath and work on mastering the motion of each stroke. Captured at 150 frames per second, Rabbath again demonstrates the seven families of bow strokes and their variations. Due to the high memory requirements, only a brief example of each stroke is captured. Since the example of each stroke is so brief, the examples have been looped in a regular a rhythm to create longer segments. It should be noted that a completely smooth loop is not possible, as each stroke does not necessarily end exactly where it began. Furthermore, since normal video is shot at about 29 frames per second and the motion capture was recorded at 150 frames, we were unable to sync audio with the motion, hence the title, A Silent Motion Study. Nevertheless, it is the motion of the arm that is the focus and the DVD succeeds in illuminating the subtlety of the motion more clearly than any other pedagogical tool. The four more complicated strokes, son premier, portato, sautille, and repeated down and up, are studied in more depth and looped with numerous animated variations derived from the original footage. The remaining three families, staccato, retake, and artificial harmonics, are looped in three perspectives.

The Art of the Left Hand

Immediately following the release of the Art of the Bow DVD in the summer of 2005 François announced his desire to produce a DVD featuring his technique for the left hand. While many the basic concepts of this technique have now become relatively commonplace - such as starting beginning bassists in the middle of the neck, using the harmonics to define left hand positions, and pivoting to reach more than a whole step in a single position - he wanted to demonstrate the depth of his left hand technique with all of the subtlety and the detail that a DVD using biomechanics animation could provide.
Why, some have asked, does one need to use biomechanics to show the intricacies of Rabbath's left hand - one can see what he is doing clearly from straight video? The simplest answer is that once a biomechanics model has been captured, then it is possible to view the motion of the arm and fingers from angles that are not possible to catch with conventional video cameras. For instance, in the Art of the Bow DVD, a set of animations demonstrates the motion of the bow as if the viewer is looking through François' back - a kind of mirror effect.
The issues surrounding a left hand DVD however are far more complex. The bow and the bones of the bow arm are each straight and move in a more or less limited plane. One can predict the range of motion, despite the intricacies, with relative ease and a basic skeleton of a bass is all that is required to see the motion of the right arm. The left hand, however, moves in a much complex range of motions; large motions up and down the neck of the instrument, as well as quite small and intricate motions within a single position. Furthermore, observing the world of the left hand requires a left hand that interacts with the physical details of a bass.
The Art of the Bow DVD utilized the animation derived directly from the biomechanics data -- within the same software. However, the left hand DVD requires a virtual bass, bow and François with some detail interacting together. The biomechanics data was handed over to Ball State's animators in what is known as the VIA Lab. Because this process is so new, there is quite a bit of trial and error involved in the process and this has required an extensive amount of time. A virtual "cartoon" version of François, bass, and bow had to be created. They needed to be designed to fit the skeleton of the biomechanics marker set and finally, all three elements must be able to dance together convincingly. The complexity of this process became bogged down in the transfer of data from motion capture software to the animation program. After months of consulting with experts in the motion capture industry, animation software developers, and a European movie studio, a way was found to import the single motion capture file and assign each marker to it’s appropriate place on either the body, bass, or bow. After the import process was complete an additional issue arose, the need for a T-pose at the start of each trial. (Not so funny at the time, the animation software was programmed to looked for the right foot first. Without a defining T-pose, the software moved the leg into the position of the first motion resulting in impossible contortions of the animated body.) Solving this issue required bringing François back to the U.S. for a second set of trials. Happily, it was discovered that the T-poses for this second set of trials could also be modified for the first set as well, despite the use of a different marker set. Furthermore, it was felt that audio was absolutely vital to the success of the demonstrations, so a 3 camera video shoot was done at the same time as the motion capture, enabling audio to be synced with all three angles of the original video and then re-synced with the animation video -- after the animations were exported from the original 200 frames per second format into standard video codex.
The end result is a two-DVD set. The first DVD contains the lessons, philosophy, and over a dozen live performances. The second DVD is a double-layer disc with three user-selectable video streams throughout the entire disc. Each example is shown from 4 different perspectives on each video stream, 3 animated angles and 1 live. This gives the viewer a chance to observe Rabbath’s demonstrations from a total of 12 distinct vantage points. 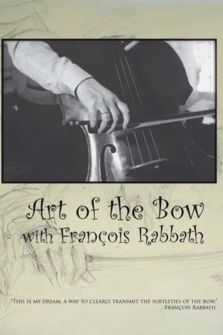 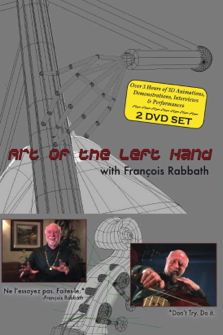